A New Frock for Pongal..

Swoosh, Swoosh, Swoosh, Chamakki’s broom swept away the leaves towards the corner of the courtyard. Dry, Crisp leaves that crunched when you stepped on them. Heaps of dry brown leaves piled high against the courtyard wall, harboring caterpillars, beetles, scorpions, ants and other creep crawlies. You couldn’t see them just like that, but when you carefully cleared some leaves with a stick, you could see them scrambling to hide from the prying hands. Chamakki was responsible for this pile becoming higher and bigger, until once a month, she would clear it completely. She would scoop them up into a gunny sack, creepy crawlies and all, and throw them over next to the river. There was already a pile there, which would be burnt off when it became too big. Now as Chamakki swept, the insects sheltering in the corner pile sensed that today was the great cleaning day and therefore to avoid being carried off to the riverside they started their immigration much earlier. Before Chamakki’s broom swept them away into the gunny sack, the insects ran up and down and all over the wall.
Swarna sat watching all this. 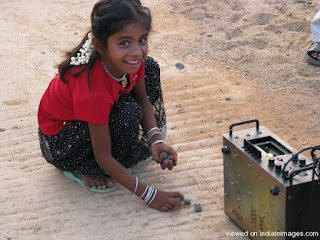 She sat on her haunches, utterly fascinated with the goings on. She watched her mother’s hips swishing this way and that, bent over the ground, with one hand resting on her back. Why all women swept with one hand resting on their spine, like some supervisor, was something Swarna never understood. She spat out the gooseberry seed she was eating, and gathered the stones with which she was playing jacks. She stood up, yawning and stretching her arms. From across the river, came the strains of temple music. It would be Pongal soon, and Swarna looked forward to the festival. A wrinkle creased her little forehead as she thought about it.. What would she wear? She had only 2 good frocks, the red and the green. And both she had worn for Dussehra and Diwali. Maybe she would have to repeat the red one which she had worn for Dussehra. It was still ‘unfaded’ and as yet not torn. She felt a little sad but knew that her mother could not afford to get a new one. Already she was cribbing about the lack of rice and oil in the household and was waiting for her next month’s salary to buy them.
Maybe some miracle would happen and like Cinderella she would also get to turn into a princess.
She had heard the story from Deepika, the new girl who had come to stay in the Haveli next to the tea-estate. She especially liked the part where the fairy godmother whirled her magic wand and lo, Cinderella’s clothes changed into golden and red and blue and white and all the colors of the rainbow. She would make Deepika read the part again and again until Deepika would throw down the book in mock anger, and Swarna had to beg her to not stop reading.
She made her way to the well and washed her hands and feet with the little bar of soap thrown out by Deepika’s mother and which she had picked up eagerly. It still smelt faintly of jasmine or rose, what it was, Swarna was not able to decipher even now. But of course she had had the bit for about one month and obviously it had lost its fragrance, though she did not mind at all. She went inside the hut and ate the dry chapatti that was leftover from yesterday’s supper, along with a piece of onion. She wiped her mouth with the edge of her frock and ran out to play with Deepika.

The river was filled to the brim and the waters rushed about menacingly. It splattered against the banks and wet the rocks and pebbles on its shores.
Deepika was perched on a rock and throwing stones into the river. A little distance away, Roshan and Ezekiel catapulted at imaginary birds in the sky. The four kids played everyday in the afternoon. Ezekiel was the potter's son who stole out from the toddy-reddened eyes of his father when his friends passed by. The two girls decided to play ‘House’ and soon set about collecting ‘twigs’ for the ‘fire’, leaves for food and sticks for spoons.
Deepika was the wife today. She clutched the doll in her hand and bent over to river to wash the imaginary clothes in the water. ‘Careful’, Swarna shouted, ‘or you will fall into the river’….Deepika turned around and laughed.
That was when Swarna screamed.
Deepika’s feet slipped on the moss-covered stone and she tumbled headfirst into the river. By the time Swarna stood up, Deepika’s head could be seen bobbing in the water. Both Roshan and Ezekiel screamed and jumped down from the Big rock and came running to Swarna’s side.
What would they do now?
Roshan cried out his sister’s name over and over again. Ezekiel sobbed hysterically. Swarna stood rooted to the spot. Her 8 yr old mind worked frantically thinking of a way to get to Deepika. She knew the only thing that would save Deepika was if she got stuck in some weeds by which time, she could swim over and drag her back. She sent off Ezekiel to call someone from the village. She jumped in and swam behind Deepika. As Luck would have it, Deepika was caught in the roots of a mangled tree that grew a little into the river. She swam as fast as her arms could carry her. She reached Deepika and grabbed her little hands, winding them around her back. The terrified girl clutched Swarna, locking her in a fierce padlock. It was difficult for Swarna to swim against the current and that too, with Deepika clinging to her, almost choking her. She swam with all the strength she could muster, chanting the small Prayer, her mother had taught her. She swam for an endlessly long time, until the river seemed to swallow everything in its way. She felt the water against her face, and inside her nostrils and all the way inside her head. And yet she swam relentlessly, pumping her legs, her hands, pushing against the current, fighting the river’s strength.

Swarna felt her mother’s hands around her. Chamakki was holding onto her and weeping. She hugged her to her bosom and the salty tears streamed down her face to flow onto Swarna’s face. She smiled. She turned her head around to see Deepika lying on the ground, stirring with consciousness and being attended to by her parents. She saw the villagers crowding around them to catch a glimpse of both girls. Swarna hugged her mother back and smiled at her. Her mother continued to cry. ‘Don’t cry, Chamakki, who can overturn God’s decision?, the old crone in a green sari comforted Swarna’s mother.
Swarna was puzzled by her mother’s reaction. Why did she not stop crying, now that Swarna was safe?
Maybe she was shocked at the danger her little girl had just gone through. Swarna got up and walked over to the sofa where Deepika sat in her mother’s lap. Deepika was looking at where Chamakki sat, on the floor, large tears pooling up in her eyes.
Swarna asked her ‘What’s wrong, Deepika, now you are all right. You did not die, so why are you crying?’
Something in Deepika’s eyes unnerved her.
Deepika was staring right past her, as if her gaze went through her body, as if she, Swarna was not standing there at all, as if Deepika never saw Swarna standing there!
What was wrong with everyone?
Swarna turned around and saw that her mother was still sitting, weeping, on the floor and in her arms were her, Swarna’s limp body! 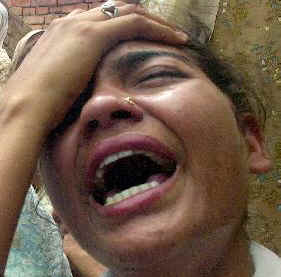 But if she was standing here, then who was that, in her mother’s lap? She shrieked, but no one seemed to hear her.
She ran to Chamakki, grabbing her hands, touching her face, pulling at her sari. But her hands seemed to be made of air, they did not even cause Chamakki to blink her eyes! It was as if Chamakki had never felt her daughter’s touch.
‘What is the matter with my hands, Aai?’ Swarna cried.
She shook her mother, but she sat like a stone, weeping, wailing, and tearing at her hair. Deepika’s mother stood up and went inside the bedroom to return a few minutes later. She held a plastic cover in her hands. She pulled out a peacock blue frock out of it. It had silver sequins all over the front and silver ties at the back. It even came with a matching rubber band and hairband set. It was beautiful and Swarna shrieked in delight. She saw Deepika’s mother put the frock over her body.
Not the body that was standing, but the body that was lying in Chamakki’s lap!
She saw Deepika’s mother put the hairband on her hair and the rubber bands on her pigtails. Oh, how beautiful she looked! It was what she wanted to look like for Pongal. She finally had a new frock.
She went and touched the other Swarna, the one in Mother’s lap.
She touched the frock and smiling, lay down in Mother’s lap.
She was happy now.
Chamakki looked down, startled. She felt as if her child had twitched. But no, she was as cold as ice and lifeless, albeit strangely the child felt a little heavier.
Chamakki continued to weep and beat her chest.
on March 02, 2010 2 comments: Links to this post